A young dutch couple, Rex and Saskia drive to Paris for a vacation during a Tour de France. At a gas station stop, she disappears. Three years later, her husband is still obsessed by communicating with her kidnapper, Raymond Lemorne and learning the details of what happened. And the kidnapper fuels this fire by sending postcards and setting up meetings he never turns up for.

The original version of this movie takes creepy to 11. Without graphic or exploitative depictions and by using the premise of bringing perpetrator and victim together, the movie masters subtlety.

What we imagine is far worse than what can be shown. 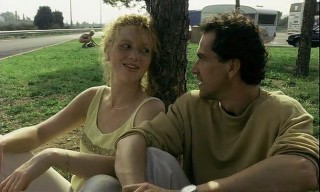 It begins with a couple of tense and strange moments. First, Saskia discusses a nightmare with Rex. In it,  she is trapped inside a golden egg and floating through space. It is terrifying and lonely. Second, the couple has a fight in a tunnel where they run out of gas and in anger and frustration Rex abandons Saskia there to walk to a station. When he returns she has calmed but clearly feels hurt and abandoned, and rightly so considering the fears expressed in her dreams. They get past this, but it’s a bad omen.

Then we really get to know Raymond and the effects of Saskia’s disappearance on Rex.

In a haunting, careful way we see the process by which this killer prepares for his victim. And we get to see his normal everyday life, his obsessive perfectionism and his lovely, wonderful family that adores him.

And in a painful, heart – wrenching way we see Rex’s obsession grows and his wounds fester. He feels he must know these gruesome details in order to heal. Consequently, he has little life to examine. He lives in Paris now instead of Amsterdam, his “job” seems to be about finding the killer, his current girlfriend is neglected and moving apart from him and he is still overcome by grief.

I would argue the truth here is really about letting go, accepting his wife’s demise and moving forward. Let the dead bury the dead, as they say.
Instead, his inability to let go weakens him, making him vulnerable to the sociopath manipulator.

Let me say this as an aside and in defense of my beloved horror genre –  horror movies are no more exploitative of victims, especially women, than any other type of movie. My appreciation of this film withholding the graphic scenes is that it escalates the mood and quality of the film, and demands a different and refreshing approach. In fact, it makes things seem more brutal at times by not relying on the gore to drive the narrative. The other extreme of graphic depiction also has its place.

I recognize and resent when any movie crosses that line into exploiting and putting down women. It happens, sure, but often women take the lead as heroines. They solve problems, escape dilemmas, strategize and fight and they also win some of those fights. Far more empowering than obsessing over expensive shoes, being thin and pining for a fucking husband. That’s oppressive. Like Eli Roth says, “I’d say women were far more exploited in Valentine’s Day.” Agreed, Bear Jew, and I would add that horror allows many opportunities for females to shine.

Ultimately, Rex learns the truth. And as Raymond admitted early in their conversation, there are far worse things that he can imagine than to kill someone and he wanted to do the worst he could imagine.