In my mind, if you don’t appreciate Rob Zombie’s House of 1,000 Corpses, you’re not a true horror film fan. Although certainly an homage to the ground-breaking films of the 70s – primarily those crafted by Tobe Hooper (Texas Chainsaw Massacre) and Wes Craven (Last House on the Left and The Hills Have Eyes) – this film is a celebration of the horror genre itself. His first – and best – film, Zombie pulls out all the stops and delivers a phantasmagorical presentation that’s simultaneously macabre and full of infectious energy.

Fittingly, the film opens with an image of Boris Karloff from the 1932 film, The Old Dark House. Cleverly paying tribute to a horror classic and foreshadowing events to come (The Old Dark House was arguably the first “crazy family” horror flick), this clip is the film du jour for a local, late-night movie program, Dr. Wolfenstein’s Creature Feature Show (and part of channel 68’s Halloween Eve movie marathon! Nice!). Although not integral to the plot, this brief scene sets the viewer up for the parade of amazing and frightful imagery brought to the table as a veritable horror feast. Save me a seat! 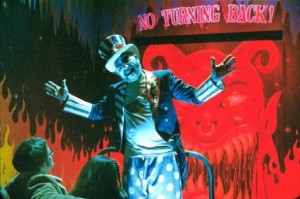 The scene shifts to a terrific fantasy-horror rest stop, Captain Spaulding’s Museum of Monsters and Madmen! Spaulding (a nice, warped reference to Groucho Marx) is brought to vibrant life by the incomparable Sid Haig (of Spider Baby fame! See the review below). After taking out some incompetent would-be robbers (and establishing the excessive violence to follow), Spaulding cleans up and guides two young couples (led by Rainn Wilson) on a funhouse ride featuring gruesome, sadistic characters, including the infamous local legend, Doctor Satan. 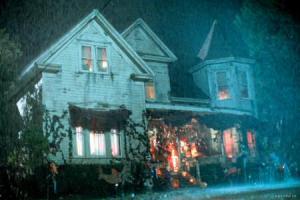 Noting the travelers’ enthusiastic curiosity and playing them perfectly, Spaulding – a mischievous host with sinister clown makeup – sends them on a misadventure to find the hanging tree of Dr. Satan. On a rain-soaked country road, they pick up the sexy and suspicious hitchhiker Baby, a pretty, giggling menace portrayed flawlessly by Sherri Moon Zombie. After a predictable tire blowout (literally shot out by a gun in the driving rain), Baby leads them to her nearby home, introducing the reluctant couples to her oddball family and effectively shutting this tourist trap.

The games – quite literally – have just begun, however. This twisted family likes to toy with their prey in an evil, theatrical way. Tellingly, the family’s creativity with their sick torture games conveniently allows Zombie to expand his inventiveness with the terrifying landscape to present many memorable, shocking scenes. Yet he and his excellent cast manage to effectively blend gore and violence of the most gruesome kind with uncomfortable humor – and even a distorted sense of family sentiment and unity – seamlessly. Truly, the fucked-up family unit here is not one to embrace, but the over-the-top liveliness of the cast drives this excellent film. Featuring Karen Black as the matriarch, Mother Firefly, the late Dennis Fimple as Grandpa Hugo, and Bill Moseley as the ranting, sadistic Otis, they equal the manic vitality generated by Haig and Sherri Moon Zombie. Rob Zombie was able to channel that great chemistry and energy (minus Black and Fimple) into his action-oriented sequel, the Devil’s Rejects.

While it could be said that the story arch is derivative and full of horror film clichés, it must be noted that Rob Zombie informs this picture with his own unique style of film techniques: hand-held camera shots; split screen effects; sexy, pulp imagery (is that Sherri Moon Zombie as Betty Page in some of those brief, flash images?); and vibrant-colored visions juxtaposed with black-and-white, grainy documentary-style scenes (often illustrating a spoken narrative). Additionally, although I’m not a huge fan of what put him on the map (his music), the soundtrack ascents this film in a distinctive and ultimately perfect way, often with a sinister, rocking industrial beat. Rob Zombie really knocked it out of the park with his first movie, and possibly surpassed some of the great films he was honoring.