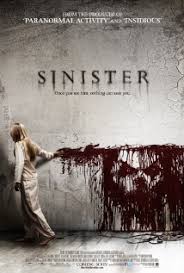 I’m gonna run with the idea that most of you have heard the premise of Sinister- a true crime writer moves his family into the home where a family was killed and finds video footage of the murders and other slayings. The crimes are especially brutal and all involve families and a missing child.

Ethan Hawke’s character, Ellison,  is consumed with the desire to reignite his fame as a true crime writer and of course, this will be his downfall. As he moves through his journey of discovery it becomes clear he is missing the most obvious things and is too desperate to become successful. Hell, he is too desperate to survive, and that is, ironically, the great lesson one learns from horror films (and life) – desperation is quite different from determination and desperation will fucking kill you and your family too.

But I find the criticism of predictability unfair. It’s not predictable because this family seems doomed, it’s scary! I want to know how it unfolds, albeit, with my hands partially over my eyes.

My biggest complaint is not Hawke’s poor or predictable decisions, he is obsessed and not thinking straight and I get that, it’s part of the human condition. Its stupid shit like not turning on the lights when you walk into a room at night.

I get that the dark is scarier, but the failing of  this approach in horror ( and in crime and paranormal investigation stories) is that it makes no sense and dumbs down the whole story. So for example, when Ellison decides not to call the cops, it’s a reasonable choice since they have established that he is at odds with cops and they even said they wouldn’t help him out anyway. In the same sense, there has to be a way horror writers can perpetuate fear in the light, or explain sensibly why a light may not be used (like a power outage, which they do utilize at one point in Sinister.) My other beef is with the wife’s decision to stay with him after so many poor decisions and lies. It’s not unfounded or unbelievable but it is remarkably generous and I am not sure I am as big a person. But then again, I am alive.

Dude, look at the screen!

Now that said, this film does so much right. The soundtrack is perfect,  from eerie to distorted and at all the right moments. The way the found footage turns up, the mysterious film reels, the sounds of shuffling in the house at night, just amazing. I enjoy that it goes from true crime to a scary supernatural myth. In reviewing the found footage of the murders, Ellison notices a face that appears in the background. Is it a juggalo? or King Diamond? or that guy from Slipknot? no he is Bughuul, a made up but scary as shit Babylonian god who is out for blood. Vincent D’Onofrio turns up to explain this to us, which is a perfect nod to an awesome TV crime investigator. Despite the supernatural turn, the film remains frightening to me, making the evil forces they face more palpable. Also, the actors all do a great job, Ellison and his wife have real chemistry, the kids arouse sympathy and creep us out, and the sidekick character, Deputy SoAndSo, played by James Ransone, is great. He is the determined investigator in contrast to Ellison’s desperation.

Thanks a lot, Henry James

Overall, I would say this is a well crafted tale of a doomed family and a good use of the found footage gimmick. And creepy kids! Gah, the creepy kids are so disturbing!

I decided Bughuul was King Diamond