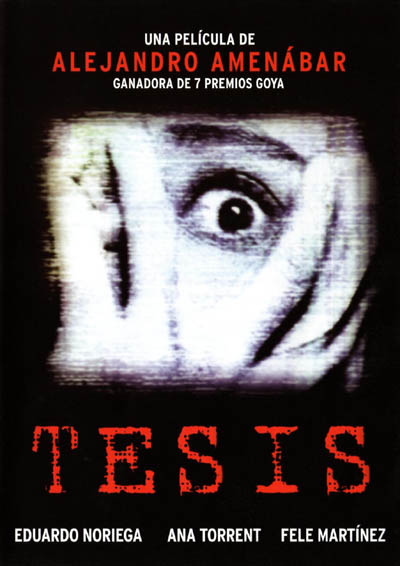 In case you don’t know Spanish or are incredibly dense, Tesis means Thesis, and that in and of itself implies horror to thousands of academic-minded individuals. However, this thesis project is more than academic and takes some incredibly violent and scary turns.

Angela is working on her thesis about audiovisual violence and its effects on family and society. She is discussing her work and research with her thesis professor when he suggests she needs more research examples and he knows of some controversial videos in the school archive.

He has to be sneaky because the archives are monitored, the violence is clumped with the porn (an interesting and perhaps somewhat political choice by the filmmakers) and grabbing a video like this would be super duper embarrassing! In fact, in a last minute scramble to avoid being seen, he ends up grabbing a random tape from that section to preview. Angela finds her prof in a screening room, he is still, she slowly approaches, realizing something is amiss and then discovering he is dead, his asthma inhaler on the floor. Whatever he witnessed was so horrifying it literally took his breath away. Angela grabs the tape and runs, compelled to understand what happened, to further her research and to privately mourn her teacher.

I love this trope by the way, it reminds me of the King in Yellow by Robert Chambers, where exposure to a story or image so terrible changes you forever, leading to insanity or death.

Anyway, she tries to watch the film but can’t, instead immersing herself in the terrifying audio. She finally decides to take it to her acquaintance and research aid Chema. He is our resident horror movie metal head who has a rep in the film department for digging extreme violence. She has tapped him for insight before and now needs him to watch this with her.

Chema watches the film, Angela is there but looking away. He quickly realizes, this is not a film but real, a snuff video of a woman tortured, killed and dismembered, a woman who attended university and disappeared just 2 years before. He tells Angela not to look but it is too late, she could not resist. In a sense her looking affirms part of her thesis, that violence is compelling and we are visual creatures and not looking is so much harder. Yet what we see cannot be unseen and can and does change us forever.

And now this becomes not just an artistic inquiry but an amateur investigation into murder. How giallo!

Chema and Angela review and dissect the video endlessly looking for clues. When they think they have tracked the type of camera used to another student, the story becomes more complex as Angela finds herself attracted to the suspect and questioning her trust of Chema. From here the intrigue grows as they slowly uncover who is involved, and how high up it reaches. They build and lose trust in one another as they sort out what is fact or fiction and discover how underground and insidious the world of snuff is. And as in the best giallo, they find themselves in some terrible sticky situations that may mean their death.

Tesis is smart and compelling. It is essentially Angela’s thesis fleshed out, depicting how witnessing violence undeniably affects us. It also addresses the way violence is perpetuated through marketing and media. At one point, a professor states that a filmmaker should give the audience what they want. But this reveals the chicken-egg argument about violence, does the audience always demand it or have they grown to expect it, maybe desire it from having been exposed to it? It is also a self-reflexive question, as the filmmakers can only ask and depict these issues in the context of a horror or thriller, genres often blamed for going too far in showing torture or murder. But to their credit, the horror lies in the story, not in exploitation, so if you are squeamish or not into horror, you may still enjoy this movie (though there are definitely some tough scenes.) Still, Tesis is an intelligent must-see thriller with great pace, an excellent cast and a thought-provoking story.