The Italian/Euro cinema sub-genre known as the Giallo has been acknowledged repeatedly on this blog, and its genesis coincides with the birth of the Euro or ‘Spaghetti’ Westerns that also emerged in the early 60s. I’m not alone in my appreciation of the Spaghettis, and some of these ground-breaking films are rightly considered among the best films of all time. Like the creativity in all art forms and entertainment in the incredible epoch of the 60s, Euro Westerns exploded and transformed the landscape of film making, and as a result, their popularity made them arguably the most prolific genre films produced by the end of the decade.

Inevitably, with Euro and Italian Horror sharing the same talents and resources during this period, there was bound to be some examples of genre elements cross-pollinating. While there isn’t a blatant example of an attempt to make a horror-western, there are several instances of horror being a clear theme in the narratives of some Spaghetti Westerns.

One of the best examples is the 1969 film, Django the Bastard (AKA the Strangers Gundown). It should be noted that like many films that followed the iconic 1966 classic, Django, this film is in no way a sequel. The title was simply a marketing strategy that was employed dozens of times to cash in on the wild success (especially in Europe) that the original film had. Regardless, Django the Bastard is a worthy film in its own right. Starring Anthony Steffen (who also co-wrote the script), the main character patently channels the man-with-no-name archetype that Clint Eastwood established in the Sergio Leone Westerns (almost all Spaghettis did), but tellingly, the film anticipates Eastwood’s own High Plains Drifter, which came out many years later.

However, while the Eastwood film reveals the main character’s apparitional status in a more subtle way throughout its presentation, Steffen’s Django is offered as a vengeance-minded phantom immediately. The opening scene is terrific, with Django serving notice to his target by planting a pre-made grave marker in front of his domicile before dispatching him. This pattern follows throughout the film, and the subsequent scene that chronicles the demise of Django’s next victim is the stuff of gothic horror: not only is a grave marker provided, but the prey is also led astray to a cemetery where an open grave awaits.

Good stuff. The film however, generally evolves and concludes in a familiar way with westerns, including the frequent component of a showdown in a ghost town.

Another film with some notable macabre features is And God Said to Cain (AKA Revenge at Sundown), with Klaus Kinski uniquely cast as the protagonist (as opposed to his common western appearances as ‘crazy gringo’ or bad guy). Admittedly, accepting Kinski as a hero and enduring the horrible theme song make this a challenging viewing experience at times, but director Antonio Margheriti (known for several horror films) applies even more chilling themes than Django the Bastard.

Following his release from a 10-year chain gang incarceration – for crimes he’s innocent of – Gary Hamilton (Kinski) methodically and quickly makes his way to the Town/Estate of the craven character who framed him. This journey successively occurs on the eve of an intense storm ravaging the same area, which is but one factor that lends a supernatural element to his vengeful enterprise. Crows lurk and screech when Gary’s name comes up, wind swirls on queue when he makes his presence known, and he navigates dark, Native American tunnels to outmaneuver his quarry. Much of his work is done by the mass hysteria and paranoia that his opponents succumb to, which leads to them offing each other at times.

Honestly, of all the flicks I’m covering here, this offering comes closest to being a fully realized horror-western, but certain features (that ridiculous theme song!) prevent that, mainly in the opening and closing moments. This is a shame, because as good as the horror themes are, a stronger commitment to those same themes would have made an even stronger film.

What? I’m the hero of this flick? Whoa…

Requiem for a Gringo (AKA Duel in the Eclipse) takes on a comparable trajectory as the last film, but instead of a timely storm, the protagonist plans his destruction of a ruthless gang that killed his brother during an eclipse. In a clever twist, the hero utilizes science (Astronomy!) as a tool to create a perception of supernatural power to his enemies. He also has some eccentric qualities, like riding a mule and wearing a leopard skin poncho, which could be a byproduct of the 60s, the film’s Euro origins, or both. Regardless, it’s a fun film with a great rogue’s gallery of coldblooded villains to contend with and some suitable, eerie atmosphere. 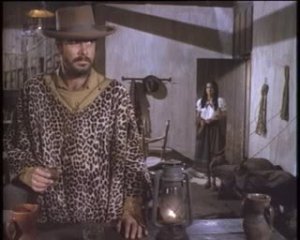 Finally, I’d like to mention Lucio Fulci’s Massacre Time, starring Franco Nero. Admittedly, while this film is a tremendous, rare western by horror-maestro Fulci, its horror credentials aren’t as obvious as the previous films mentioned. The heavy in the film is an extreme psychopath, given to horrific deeds like literally feeding people to dogs, merciless whipping, and crucifying. In a nice macabre twist, this sick creep also plays an organ with a perverse look on his face. Nero’s hero, with some help from his estranged brother (an impressive performance by George Hilton), ensures that justice prevails in an awesome finale that allegedly influenced other film directing greats like John Woo.

I was able to stream all of these films via youtube, albeit in varying quality (I’ve yet to find a copy of And God Said to Cain in an agreeable format). All are worth checking out, not just for the ghoulish and spooky elements, but also as an opportunity to absorb amazing action scenes, astonishing locations and cinematography, and the usual fare of stunning, statuesque beauties that seem to grow on trees in Europe.