I was honestly not expecting much of this, perhaps a lesser version of Slumber Party Massacre; alright, it turns out that is still true, but it is a surprisingly great slasher flick!
The set up is pretty much what you’d expect: school is out and the girls at a sorority want to throw a  party. They try to clear this with their house frau, whose a total bitch, and just wants them out of there. The girls are having this party anyway, so they ignore her and decide to fuck with her.
But wait, we got a back story going on. Flashback to house frau being pregnant and something vague going wrong. There was secret baby-having and that baby was born fucked up. Now fucked-up baby didn’t die, he was isolated and given minimal care to ensure he grew into something unpredictable and violent. 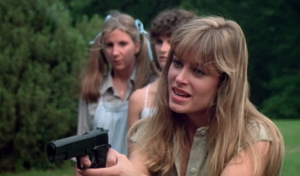 So back to the party plans. The girls devise a ridiculous prank involving a gun to scare the house frau to jump in the pool after her cane. Her cool and very sharp cane. But in the process, as the old woman is backing up they actually fire, not thinking real bullets were in the gun. Ta-da!
What a bummer! Now they have to have a party with a body in the pool. Oh well, so they have a party. I mean they plan to do something with the body after the party. But you know, party! On that note I have to add they had the best parties in the 80s, a billion people show up, they dance, the band was rocking. I feel like I throw parties and 6 people show up. Sigh. But really be sure to check out the band here, 4 out of 5 Doctors.
Then the fun begins. Bear in mind that this set up occurs fairly quickly so I really like the pace of all this. Before the party’s out several brutal murders have occurred and the kids are losing their minds! Slashing is every where. The girls suspect house frau is behind this, they know nothing of the son, and of course, her body has gone missing.
At some point, our main gal Katey calls the doctor on the house frau’s med alert tag. I don’t recall exactly why she decided this was the best approach and it seems a little removed to me. Regardless, he shows up and reveals that he was the doctor at the birth and that the son, Eric, is still alive. They realize he saw what they did and is now killing them all. Attic living really doesn’t prepare you for stress.
So the murders continue until Katey and Eric can have their final showdown, and its actually pretty great. This movie never tries to do more than their very low budget allowed. So it plays with shadows and screams and simple devices very well. Eric brings the creep in a clown costume, Katey is struggling in all the final girl ways, shooting him with what turns out to be blanks, then stabbing him as he falls through the floor to his death. Or not. At the last second, he opens his eyes and the credits roll.

Fast paced, effective slasher with a bit of a twist at the end makes for great horror. There’s suspense, revenge, dark humor, good acting and great direction. I can see how this became a cult classic.