Fire Walk With Me is the prequel to the TV series Twin Peaks. It explores the week before Laura’s brutal murder. Like the television show, it’s steeped in surreal darkness and often more about style than substance. While certain things in the movie are lacking over the show, there are other ways in which it is much darker and heavier.
Within the constraints of TV formats, Twin Peaks delivered a strange tale of eclectic characters and dark humor. We knew were dealing with a shocking crime in an unlikely place. And we learned about Laura’s secrets over time and the pain she endured. But throughout the show, there is comic relief, the surreal stretches were abbreviated and the depth of Laura’s abuse was mitigated by the quirky context.
But Fire does not spare us this. While the show left me feeling that Laura found herself in these unfortunate circumstances in part due to her choices, the film was a cruel reminder that Laura was a victim in every way,  thoroughly compromised and unable to do better for herself as a result. From the beginning we know about “Bob”, Laura’s father’s monstrous alter ego, and that he has been abusing her since she was 12. Laura’s terror is palpable throughout and her pain immense. It’s clear she makes choices based on temporary appeasements and survival. It’s clear the abuse has groomed her to accept further exploitation.
There are ways in which the film lacks however. Some of Lynch’s surreal interludes are too long and frankly boring. Sometimes it feels like the style choices actually undermine the seriousness of the story. However, here I found that by the last third of the film, Lynch manages to turn this around and reveal Laura’s mistreatment effectively, so much so that it can be deeply difficult to watch. Many beloved characters from the show are not here and Donna, Laura’s best friend played by Laura Flynn Boyle in the show, is played by a different actress. It’s just not the same. 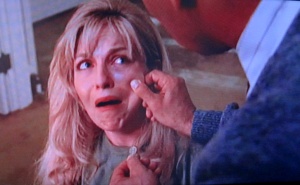 Despite these weaknesses, the movie delivers the hard hitting truth better than the show did. Bob is not some imagined or supernatural monster who reveals himself last minute but Laura’s constant tormentor. We better understand her mother’s pain and conflicted behavior and we see Leland as Bob so much more clearly. This is important because as the story unfolds in the show we feel empathy for Leland. Fire makes it clear he deserves none.
Fire could have been a tighter film with better characters and structure. But as far as its focus on Laura goes it delivers a painful and hard to tell story about the consequences of long term sexual abuse and dark secrets.