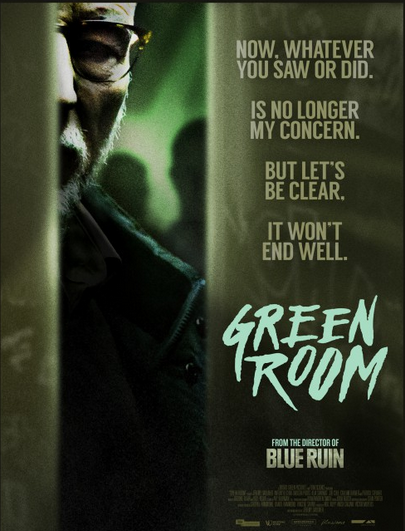 Green Room is an intense thriller about finding yourself trapped in the wrong place at the worst possible time. An old school punk band is on a super shitty make no money tour when they find the main gig on their trip has fallen through. Bear in mind the only thing contemporary about their shtick is a cell phone. The drive a beater custom van and even siphon gas like the freaking 70s. Punk rock, y’all!
Anyway, Sam (played by super amazing Alia Shawkat) arranges another gig with guaranteed pay so they can get home and maybe even eat. Food rocks. But there’s a hitch. In fact, it’s a pretty topical hitch: neo-nazis! The band is pissed but they are strapped and of course desperation is the parent of quality decision-making, so they go.
From here on the entire film brilliantly takes place in this small location, a box shaped club out in the woods, isolated, claustrophobic; and as viewers, we’re already pretty sure that nothing good can come of being trapped in the woods with nazis.

They hit the green room, psych themselves up, then hit the stage. In true punk rock fashion they open their set with Nazi Punks Fuck Off, but wisely manage to turn their audience back around with the rest of their set. They wrap up, get paid and head backstage for their things, now all pulled out into the hall. It’s weird, but they’re glad to get out quickly. But Sam left her phone in the green room. So Pat (Anton Yechlin, who tragically died earlier this year) enters the green room to retrieve it and whoops! there’s a dead person on the floor!
Naturally, Pat tries to leave and manages to get a 911 call in before the phone is taken. The stage manager, the “mature” nazi and the closest we get to a voice of reason at this club assures everyone it’s an accident and will work out. He talks to 911 and reports the stabbing, he promises it will get cleared up and then they can go. But instead he calls in their leader, a man named Darcy. So Mr. Darcy shows up (Austen lulz!) and its none other than Patrick Stewart! He very properly tells them that everyone’s got to go. For the most part, he is smarter than the others and they devise their plans.
The band is at times trapped in the green room and at times returned to it as a safe place after failed attempts at escape. Truly it is great horror that captures the monstrous duality of needing to be somewhere you hate. Amber, the dead gal’s best friend is with them now too, and her knowledge of the club and the skinheads is a huge asset, but the tension and the violence continue to escalate throughout. They are outnumbered, compromised and virtually weaponless with no way to contact anyone. It’s relentlessly violent, incredibly tense and just so, so good. And just as desperation brought them here, desperation (and their punk rock balls) are their only shot out. This is a top notch thriller: smart, fun, and intense.